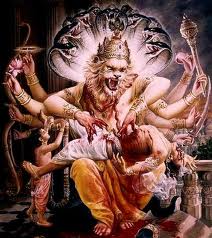 Narasimha or Nrusimha , also spelled as Narasingh, Narsingh and Narasingha is an avatar of the Hindu god Vishnu and one of Hinduism's most popular deities, as evidenced in early epics, iconography, and temple and festival worship for over a millennium.
Narasimha is often visualized as half-man/half-lion, having a human-like torso and lower body, with a lion-like face and claws. This image is widely worshipped in deity form by a significant number of Vaishnava groups. He is known primarily as the 'Great Protector' who specifically defends and protects his devotees in times of need. On the Shukla paksha  chaturthi of Vaishakh maas , shree Narsingh bhagvan appered from the pillar of the court of Demon king.

Harinyakashipu asked for the boon from shree Bramhaji, not be killed by man, animal, day or night, inside or outside, in the sky or on earth, not by any astra or shastra, not in any of the 12 months.....so Shree Hari Vishnu incarnated as half lion and half human, during the evening, of ADHIK MAAS, and took Harinyakashipu on his lap , sat on the doorway and tore apart the stomach of the demon.
Narsingh Avtar is krodhavtaar of Shree Hari Vishnu. So krupasindhu , incarnated for just one bhakt Prahlad.
One day while Hiranyakashipu performed austerities at Mandaracala Mountain, his home was attacked by Indra and the other devatas. At this point the divine sage Narad intervenes to protect Kayadu, whom he describes as 'sinless'. Following this event, Narad takes Kayadu into his care and while under the guidance of Narad, her unborn child (Hiranyakashipu's son) Prahalad, becomes affected by the transcendental instructions of the sage even at such a young stage of development. Thus, Prahalad later begins to show symptoms of this earlier training by Narad, gradually becoming recognised as a devoted follower of Vishnu, much to his father's disappointment.
Hiranyakashipu furious at the devotion of his son to Vishnu, as the god had killed his brother. Finally, he decides to commit filicide.[10] but each time he attempts to kill the boy, Prahlad is protected by Vishnu's mystical power. When asked, Prahlad refuses to acknowledge his father as the supreme lord of the universe and claims that Vishnu is all-pervading and omnipresent. Hiranyakashipu points to a nearby pillar and asks if 'his Vishnu' is in it:
"O most unfortunate Prahalad, you have always described a supreme being other than me, a supreme being who is above everything, who is the controller of everyone, and who is all-pervading. But where is He? If He is everywhere, then why is He not present before me in this pillar?"
Prahlad then answers, He was, He is and He will be. In an alternate version of the story, Prahalad answers, He is in pillars, and he is in the smallest twig. Hiranyakashipu, unable to control his anger, smashes the pillar with his mace, and following a tumultuous sound, Vishnu in the form of Narasimha appears from it and moves to attack Hiranyakashipu. in defence of Prahlad. In order to kill Hiranyakashipu and not upset the boon given by Brahma, the form of Narasimha is chosen. Hiranyakashipu can not be killed by human, deva or animal. Narasimha is neither one of these as he is a form of Vishnu incarnate as a part-human, part-animal. He comes upon Hiranyakashipu at twilight (when it is neither day nor night) on the threshold of a courtyard (neither indoors nor out), and puts the demon on his thighs (neither earth nor space). Using his sharp fingernails (neither animate norinanimate) as weapons, he disembowels and kills the demon. Kurma Puran describes the preceding battle between the Purusha and demonic forces in which he escapes a powerful weapon called Pashupata and it describes how Prahlad's brothers headed by Anuhrada and thousands of other demons "were led to the valley of death (yamalayam) by the lion produced from the body of man-lion" avatar.